Have you ever had a prospect say “I”ll NEVER EVER do Network Marketing”?
If you’ve prospected much at all, you’ve probably heard that.

Most people walk away but I wanted to share a story from the Go Pro Recruiting Mastery in Vegas recently about WHY you shouldn’t give up on that person….especially if they are very successful in traditional business. 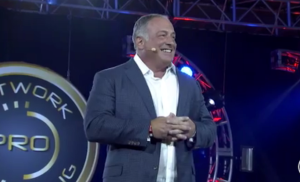 Graduated Rutgers University at the age of 20 with a degree in Economics and Philisophy.

AND the Mr. Rutgers Bodybuilding title.

For over a decade he was a highly successful institutional currency trader and broker on Wall Street,

quickly climbing the corporate ladder at some of the largest banks in the world.

Life wasn’t just good, it was great.  At least for the money part.  He had no life and had a cap on his income which he couldn’t tolerate.

He then opened up a couple of traditional businesses that were very successful, but took 80 hour work weeks.

He had a really great friend and someone he truly considered a mentor ask him to join his network marketing company and he couldn’t believe someone “credible” like that would do something like network marketing. 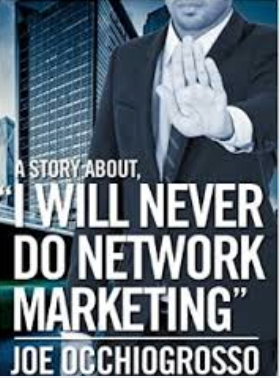 He told him NO and kept working successfully in his businesses, until the economy turned.  Another friend asked him to look and then he finally said yes, AFTER he said he would NEVER do one of “those” things.

What changed?  As I listened to him speak at the event, I picked up on some things and WHY you REALLY want someone like Joe (and he agrees) in your business.

When Joe decided to join his network marketing company, he came in with huge credibility in the business world.  People around him knew his reputation of success, and also knew him as someone “in business”.  Having a conversation with Joe about business didn’t seem strange at all.  People were open to his “money message”, since he was known for making money already.

He Has Personal Development

Joe started his network marketing business about 5 years ago.  He says the reason he was able to move so fast (he has earned 7 figures each year for the last 4 years) started over 20 years ago with Personal Development and Tony Robbins.  You see, Joe had been preparing for this most of his adult life.  He said he loved growing as a person and helping others.  Being up on that stage was a product of years of growth and investment…in JOE.

He Has Drive and Ambition

People like Joe are doing well at whatever they do, because that’s WHO THEY ARE.  They are DOERS, actions takers, and they just FIGURE IT OUT and find a way.

That’s how they’re wired and they love being that way.  He said when he started in his company, they didn’t have a corporate video…

so he and his leaders made their own.

That’s what ambitious leaders do.  They just get…it…done.

The Person Inviting Him Had Credibility With Him

Even the first person, who he said NO to, had credibility with Joe.  They had been friends for a long time and he considered him a mentor.  That credible invite started to plant a seed in Joe’s mind that maybe this network marketing thing might actually be real.  Maybe what he knew from his past might not be true, it might NOT be scam, that network marketing could be a real business.

The Timing Was Right

Joe’s  businesses had taken a downturn with the economy and the second time he was asked, he was looking.

The second person also had some credibility with Joe.  He was someone he would want to partner with.

Joe Occhiogrosso is absolutely KILLING it in his company and 75% of his leaders are just like him….have NEVER done network marketing before.

So here is some of his advice for you:

Make it simple, show a video.  You can do this anywhere, even on your smartphone sitting at a table at lunch with earphones.

Make it about the lives you’ll change, NOT you.  The more lives you change, the better your life will be by default.

Go after those very successful people you know, those that ALWAYS figure things out and are hustling already.  Tell them WHY you are doing your business and simply ask them to take a look at your business plan…for YOU.  Don’t talk to them about how good it would be for them, make it about helping YOU.  When they’re approached that way, AND it’s the right time for them, they’ll jump in and kill it…just like Joe 🙂

He also said don’t give up on those successful people.  If they tell you NO, that just means timing isn’t right.  Keep up with them, keep the relationship positive and open.  When the timing’s right, they may just join with you in your business.

Here are more tips on how to recruit someone like Joe Occhiogrosso into your network marketing business.

P.S.:  Do you lack credibility?  Were you like me when you started your business and NOT like Joe?

You need to check out this replay of a webinar on How to Build Your Authority and have prospects reaching out to you.

You can watch the replay right here…